SHARKCAGE.com uses cookies to personalize ads and content and to learn more about our visitors. We also share information with social media, advertising, and analytics parters who may use the information from our site in conjunction with information gathered elsewhere. By closing this message and continuing to use our website you consent to our cookies.

Perhaps this situation sounds familiar. Your unit has received a mission to deploy somewhere overseas, or you are already overseas and returning to your home station. You have packed all your equipment and are ready to go; then, you meet the customs inspection team, and they tell you that wood is not allowed. So, your unit quickly decides we will just take everything out of the wooden crates and floor load it into containers. This takes almost all day to accomplish but you are determined to make the mission work. Finally, you get everything onto the ship, and it is on the way. Fast forward to the destination, and it is time to unload. Perhaps you were allowed to keep the material in the wooden boxes but when you start pulling material out it is saturated with mold from the saltwater during transport and about 30% of it is damaged. Or, you had it floor loaded in a container and somehow everything you loaded is no longer in the container; somewhere or somehow items are missing. Sound familiar? We have all been there.
Traditionally, this organization has relied on large wooden crates for the storage of their tentage and accessories known as SL-3. Over time, the use of these wooden crates revealed recurring problems. These problems had a fiscal liability as well as a shipping and physical liability.
Fiscally, the organization had to spend approximately $120k annually to replace wooden crates; additionally, storing in the wooden crates prevented airflow which led to damage of the tentage stored in the form of mildew. This resulted in further liability for replacing the damaged material.
A shipping liability was identified regarding customs and agricultural clearance where many countries don’t allow wood products to be imported. This significantly reduced their readiness and ability to operate rapidly since they would often have to unpackage the material inside the wooden crates, discard the wood and simply stuff the containers with the material that was unloaded. This significantly impacted accountability, organization, security, and time. Property was even lost due to responding rapidly to the situation and ensuring the mission moved forward which led to FLPLs.
Other limitations of the wooden crates included loading and security. There was no way to lock the crates, so they are very easy to break into. When it comes to loading and unloading, the crates are only accessible from the top. Loading heavy equipment is physically demanding enough without the added challenge of lifting it 3-4 feet off the ground. This often requires more personnel for the tasks of loading and unloading content from wooden crates.
Ultimately, the organization felt it was wasting a lot of resources towards the management of material which is deemed mission critical. Here is some of the waste identified: 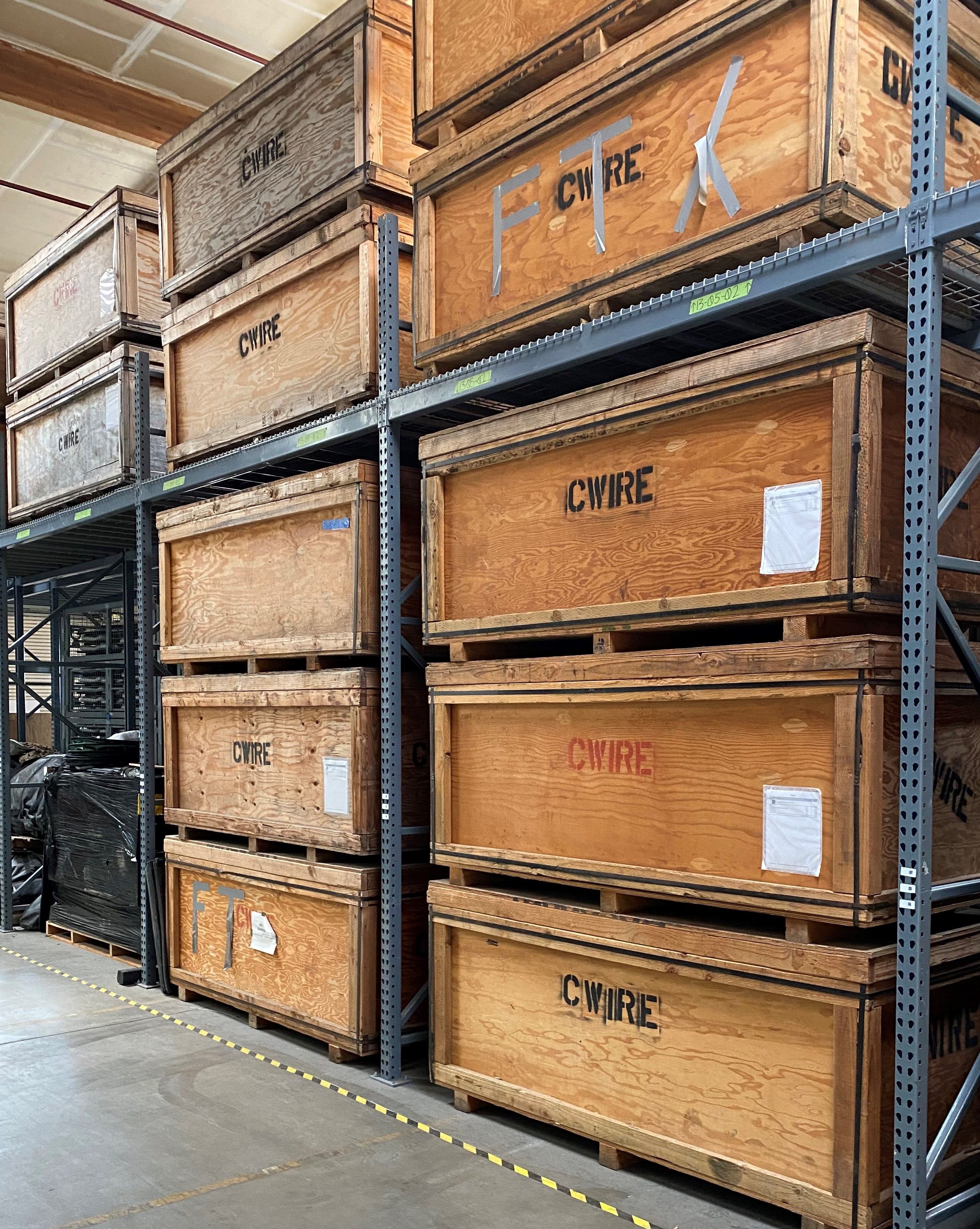 SHARKCAGE proposed modifying one of our existing products to meet their requirements. The Tactical Basket family of products already has gridded sides which promote airflow, plated bottoms and tops to prevent snagging of material, accessibility from the front and top, and the ability to lock with a standard issue padlock. The reason for modification was transportability. This organization used low-cube 20’ containers to transport their material which meant we had to reduce the height of our existing basket to accommodate stacking two-high in a low-cube container. Obviously, when you reduce height, you lose some space, so we also increased the width of the existing cage to compensate. The result was a Tactical Basket L+.
However, just having a designed solution for their challenge we further provided two prototypes for them to evaluate and test to ensure it met their needs. After testing the prototypes, the organization determined it met all their requirements and moved forward with implementing the solution. 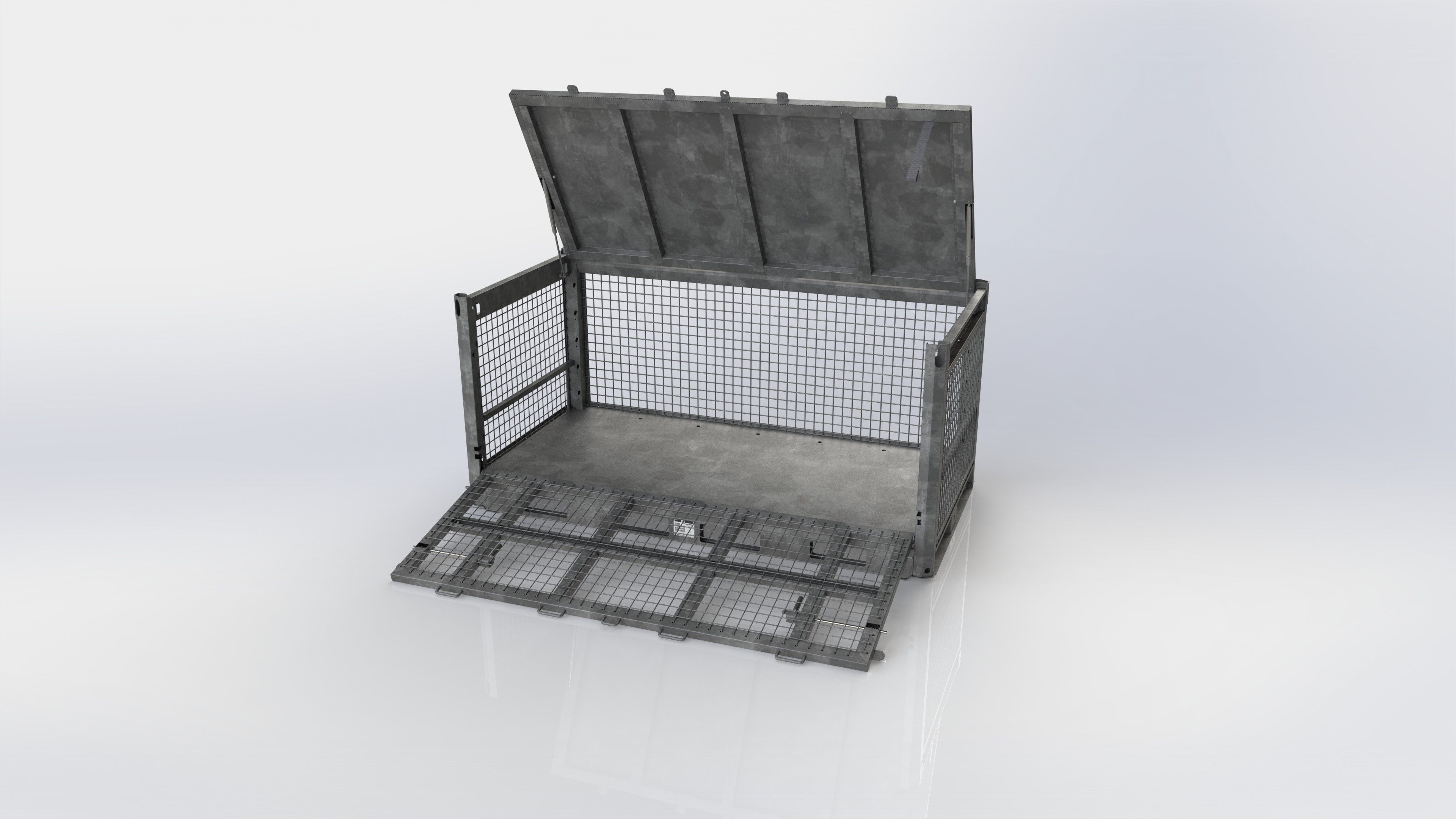 The unit has incorporated 100 Tactical Basket L+’s to their operations and have already experienced significant improvements.